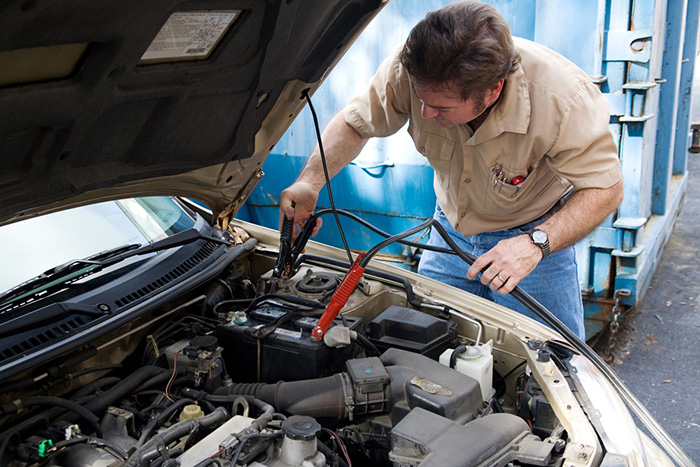 Is it safe to charge a car battery overnight?

Yes, it’s safe to charge a car battery overnight, but do not keep the battery connected to a charger for more than 24 hours. It’s safest to use a charger that automatically stops charging when the battery is fully charged.

There are a few dangers associated with charging a car battery overnight, leading to overcharging the battery. These risks include an explosion, gassing, and melting of the battery.

If your car has a lead-acid battery, there is a considerable risk of explosion due to hydrogen buildup if the battery gets too hot. Alternatively, the temperature of the car battery cells tends to increase drastically and heat the battery. This paves the way for an explosion.

If the charger is left ON continuously, the battery will die eventually due to excessive gassing. Hydrogen and oxygen are generated when the battery electrolytes become hot and trigger the gassing action. In a lead-acid battery, the released hydrogen tends to react with the sulfuric acid in the battery and produce toxic hydrogen sulfide.

There is also the possibility of evaporation of hot electrolytes resulting in exposure of the plates that tend to get corroded.

Charging a battery overnight can cause the sulfuric acid and distilled water in it to boil at a high temperature. This will eventually result in the battery getting melted or swollen.

Can you leave a car battery charger on too long?

Make sure to turn OFF the battery charger or remove the battery from the charger after 12 to 24 hours based on its capacity.

What happens if you leave a car battery charger on too long?

If a car battery charger is left ON too long, it will damage the battery and make it useless. In a typical battery, the acid present reacts with the lead plates to create and store electrical charge.

Overcharging a battery by leaving the car battery charger ON too long will cause the electrolytes/acids to evaporate. This prevents the formation of electric charges and renders the battery useless. Therefore, today’s car manufacturers have made their batteries and chargers smart enough to stop charging once the battery is fully charged.

How long can I charge a car battery for?

You can only charge a car battery for 12-24 hours, but it may take up to 2 days to fully charge.

A low amp battery will have to be charged for a longer duration than a high amp battery to revive it if the battery is completely dead.

Make sure to keep the charging voltage higher than the battery voltage. It is a good option to use slow charging or trickle chargers for long-term use as they don’t overcharge the battery. These chargers take two days or more to revive a dead battery with a full charge and utilize only one to two amps.

How do you charge a car battery overnight?

The best way to charge a car battery overnight is to use a battery charger that supports the automatic cut-off functionality. This will prevent the battery from getting overcharged and eliminate any problem associated with it. The actual steps involved are the same as when you charge the battery for a few hours.

You should wear protective gear like gloves and glasses when handling the battery to avoid chances of shocks or burns.

The battery terminals must also not be connected or come in contact with metallic/conductive materials to prevent electric shock.

The following steps walk you through the process of charging your car battery overnight.

2. Do a battery test to check if the battery is faulty or has some issues. Ideally, you visit a workshop to seek a professional’s assistance to check the acid-water level of lead batteries rather than attempting to do so yourself.

3. Keep the battery straight in the upright position. This step is essential if you plan to remove the battery from the car during the charging process.

4. Connect the charger to the battery before connecting the mains. This should be done in the reverse order of the disconnection mentioned in Step 1. The red cable must be connected first, followed by the black cable.

5. Disconnect the charger before disconnecting the wires after the battery is charged.

There are a few aspects that are worth keeping in mind before commencing the charging process. Ensure that you have enough ventilation when the charging occurs, especially if you plan to charge the car battery in an enclosed space. Explosive hydrogen tends to build up along with degassing while charging lead batteries.

Make a note of the defects in the batteries, such as an acid leak. You will have to be extra careful while handling such batteries as you may burn your hands if they come in contact with the acid.

Can I start my car with the battery charger still attached?

If you plan to start the car quite often with the battery charger attached, you can charge the battery for 10 to 30 minutes before moving the vehicle. Ideally, you charge your battery as much as possible before getting the car to move.

If there is no charge on the battery, then the car will not start. Even if it does start, don’t drive the vehicle with a flat battery since it draws the power from the low output charger and overloads the charger.

Can a car battery charger start a fire?

Does a car battery get damaged if I charge it overnight?

A car battery is less likely to get damaged if it’s charged overnight using a charger with auto-cut-off functionality that stops charging the battery after it has attained 100% charge. However, if you use a standard charger and the battery gets overcharged, it may get damaged.

The type of battery is in use also determines the extent of the damage if it’s charged overnight. It’s advisable to be extra careful with lead-acid batteries.

With the recent advancements in modern car batteries and chargers, there are fewer chances of damage if charged overnight.

You can also consider using an intelligent battery charger with the auto-cut-off feature to stop charging automatically after the battery is fully charged.

Take all the required precautions before charging the battery and check for all possible faults or defects.

You should also make sure that you charge your battery in the right environment with enough ventilation and away from combustible items.

Even if the batteries accidentally catch fire, they will not cause any severe damage.