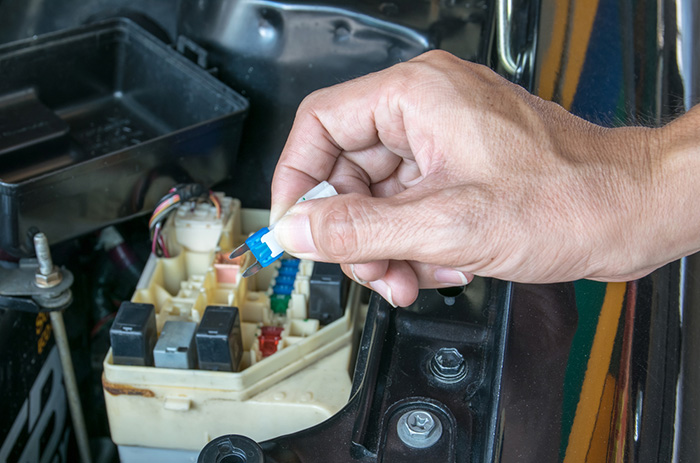 Why your Car Fuse Keeps Blowing?

There main reasons why a car keeps blowing the fuse is because of a defective amplifier, too much resistance or using the wrong size fuse.

The engine components are damaged when the wires of the amplifier are attached to an incorrect fuse in the car. This causes the fuse to go off immediately after the power is supplied.

Alternatively, it would also end up damaging the vehicle’s components by creating a fire in the electrical system of the car. It is best to evaluate the power wire and the opening side of the fuse at the time of installing the amplifier to prevent any kind of damage.

A defective power wire or a wire which is thinner in diameter causes a lot of resistance. As a result, the amplifier has to work laboriously resulting in a large amount of heat production within the system. This heat eventually ends up flowing into the car fuse continuously, causing more resistance than required.

The best practice to follow would be to prevent a high amount of heat production so that the internal safety of the amplifier is maintained. Consequently, you should have the wire at least 10 gauge in size, regardless of the rated power so that the flow of electric current is effortless into the system.

Ill-fitted Connection with the Ground

If the ground cable is not connected accurately or the wire is damaged, spikes may be created. This can cause the fuse to burst. You must track the connection of the ground cable (generally black) to the chassis and inspect it for any impairment. This method proves to be beneficial in preventing such a problem that could have posed as a barrier.

On the other hand, if the wires are good, look at the connection spot where the cables may be loose. Subsequently, link them properly. If not, they would disconnect the amplifier or blow the fuse.

If the power cable is grounded along with being connected to the battery, then the fuse will keep blowing in the vehicle. This one particular fuse is lodged in the system with a unique function of blowing. The process of the fuse blowing ensures that the amplifier stays unharmed in the entire operation.

How can you tell if a car fuse is blown?

It can be easily affirmed that a car fuse is blown when an electric component in the car stops functioning due to an oversupply of electric current. This applies to usual driver-interfaced devices like entertainment systems and interior lights but can also extend to advanced systems like chassis, engine and transmission. In case of a failure, the bad fuse would require a replacement once located.

What happens when a fuse blows in a car?

When a car fuse blows, it starts melting and the car component connected to that fuse divides itself into two different tiny balls of metal.

Can you drive with a blown fuse?

A car should not be driven with a fuse that has blown. It is best to check the location and damage caused and replace the fuse. If you are not confident in handling tools, contact a car technician for assistance.

Can a bad fuse cause battery drain?

A bad fuse cannot be the sole reason behind a battery drain in the car. However, a fuse can definitely help in finding the source of the power drain. If by pulling a particular fuse, the power drains quickly, then the fault is in that particular component attached to the fuse.

Can a blown fuse cause my car not to start?

It is not recommended to replace a 15-amp fuse with a 20-amp fuse as it can prove detrimental to the vehicle. Fuses and breakers are safety instruments positioned into electrical circuits of the car to avoid overloads.

The current which passes through a fuse should not surpass its rating or it will result in a piece of metal melting on the inner side.

If a 20-amp fuse is used in place of a 15-amp fuse, it will end up blowing in a dangerous area and hamper the circuit that can cause a fire. It is always recommended to replace the blown-up fuse with a brand-new one of the matching kind and size.

What happens if you use the wrong amp fuse?

Instead of taking the risk of ruining the circuit, take the car to the nearest repair service station to ascertain the reason behind the fuse frequently blowing up.

Where is the Fuse Box Located on a Car?

Most fuse boxes are located below the hood of the car. Every car has a fuse box pre-installed in it. There are usually two fuse boxes in a car. The second fuse box is positioned under the dashboard to the left-hand side of the car’s steering wheel. The box is black and will have a label on top of it reading “Fuses”.

Are all vehicle fuses the same?

All vehicle fuses are certainly not the same and most vehicles have several fuses of different sizes for different electrical elements. Contemporary cars utilize the customary ATC and ATO fuses that are known as blade-type fuses. The size and the numerous terminals make these fuses very distinct in nature.

Older vehicles use contradictory fuses but the majority of them are Bosch-type fuses and glass tube fuses. Bosch-type fuses are cylindrical. They are also made from a firm ceramic substance that has a metal piece on the outer finish.

How long do car fuses last?

Car fuses normally have a life span of 10 years. No fuse will last forever. Even a flawless electrical arrangement that on no occasion has overloaded will wear out. Fuses degenerate over a period of time and will, in due course, break down.

It is pointless to continue replacing a fuse that keeps blowing continuously. A fuse does not need maintenance at regular intervals. Most of the fuses only require a visual inspection to check whether the metal is in place or missing.

How much is it to replace a fuse in a car?

The cost of replacing a car fuse is anywhere between $100 to $150. If you decide to replace the fuse yourself, then the cost should not exceed $20.

How to Replace a blown Fuse on a Car?

When deciding to fix or replace a fuse, you should first decide between choosing to replace a fuse by yourself or by hiring a technician. Choosing the option which is not feasible often results in an expensive repair. However, a few repairs fall under the DIY category. Replacing a blown car fuse is definitely one of those.

An instrument panel fuse block is present in every car that contains a few fuses. Its function is to attach and protect the electrical current that provides power to many devices. These devices include the air conditioning system, entertainment system and power steering. Even if one of these devices stops functioning, it may be a direct indicator that a fuse may have blown.

It is best to keep the necessary tools for this DIY procedure handy before beginning the replacement as it can save plenty of time and reduce the effort. This can also help in preventing last moment trips to buy something. Here’s the list of tools:

Use these pointy pliers in case a fuse puller is not available. This may also be a much safer option than handling the fuse with your bare hands.

The brand-new fuse is, of course, the most important tool. If a spare fuse is not available in the car, you can buy a new one that is of the same type as the blown fuse.

This is required to easily verify the position of the specific fuse.

Let us now go through a step-by-step method of replacing a car fuse that has blown out.

It’s never recommended leaving anything to chance. So, you must read through the owner’s manual and find the fuse on the fuse panel. The manual throws light on everything that should be known, including how to approach the fuse panel and information about each fuse and the various parts that it represents in the car. Most fuses are placed on the driver’s side dashboard, generally beneath the steering wheel, or in the glove chamber.

You may find various kinds of fuses. Every fuse has a particular color and number on the top specifying the amperage. A blown fuse may seem black inside or may have a fragmented filament. The owner’s manual will contain a diagram signifying which component is managed by each fuse.

After locating the position of the fuse panel, remove the cover. It is easy to remove most panels but you may also use the pliers if you face any difficulty with the removal.

While replacing a blown fuse, it’s necessary to ensure that the new fuse is of the same color and amperage rating. Some fuse panels are furnished with spare fuses. You can also interchange a fuse of a seldom-used gadget, like a cigarette lighter, but it needs to be of the same amperage and color.

After the installation process of the new fuse is complete, ensure that the panel is closed. You need to start your car and inspect if the designated electrical device is now functioning. If the device fails to work or if the new fuse blows immediately after successful replacement then the fuse component may not be the problem.

Mostly, this means that there is a malfunction elsewhere in the car’s system and the fuse is blowing up as a reaction. It’s best to take your car to a technician to detect the actual underlying issue and get it resolved.