Can I Drive My Car with Low Oil?

The level of oil in your car determines how long you can drive your car for. The 15 minutes mentioned is an average estimate only.

Ideally, if the low oil indicator is ON, you should not drive your car and have the oil checked and refilled before taking it out for a ride. The motor can end up getting severely damaged and can incur repairs worth hundreds of dollars.

Why is my Oil Light ON after an Oil Change?

A faulty sensor, low oil pressure, or a motor that doesn’t pump enough oil can cause the oil light on a car to remain ON even if the oil has been changed recently.

A faulty sensor is the most common cause behind a flickering oil light and can be fixed by simply replacing it. The oil level sensor can become faulty due to dirt or other blockages.

The oil pressure level has to be at least 5 pounds per square inch. If the oil pressure is lower than that, the oil light will flicker ON. At times, the oil pump doesn’t circulate enough oil to the engine parts and can leave them exposed to damages. Ideally, this will not be the case, but if the oil pump is too old, it might happen.

What Happens if Your Car is Low on Oil?

When a car is low on oil, the engine parts are not lubricated properly and start getting damaged by grinding against each other, ultimately stalling the engine.

The oil keeps the engine parts lubricated and prevents them from grinding against each other. When the oil level is low, the parts do not receive enough lubrication and start damaging each other.

Oil doesn’t reach the zero level often but can happen due to a leaking oil pan. In that case, the engine can get seized and you might have to get an all-new engine for your car.

Is it Safe to Drive a Car With Low Oil?

It is not safe to drive a car with low oil for longer than 15 minutes as having low oil can stall the engine and lead to an accident.

If there is damage to the oil pan and the oil level light went ON because of that, the engine may get stalled within no time, leaving your car prone to an accident. To avoid that, it is necessary to pull over and check the oil pan and oil level before continuing with your drive. 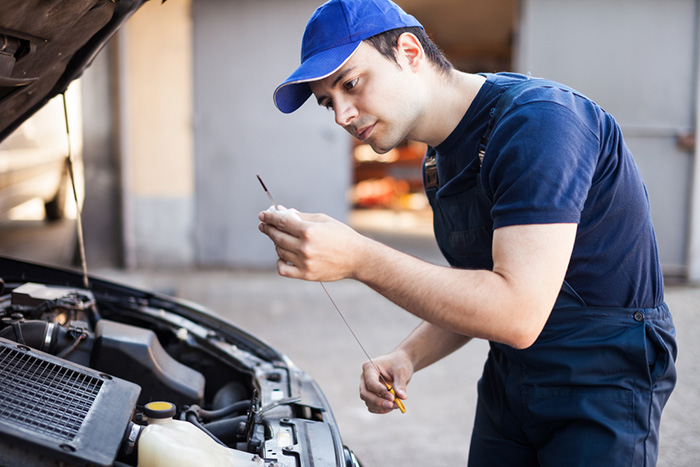 How Long Can Your Car Go With Low Oil?

From the time when low oil indicator goes ON initially, you can drive your car for a maximum of 500 miles or two weeks approximately.

Most of the older cars do not have an oil level indicator. You have to manually keep checking the oil level with a dipstick from time to time to avoid running your car on low oil. For such older vehicles, it depends on how low the oil level is.

Some cars have two lights for indicating the low oil level. The yellow-colored light indicates you have another 500 miles to change oil, while the red-colored light demands you to change the oil immediately.

How do you Know When Your Car is Low on Oil?

When the car is low on oil, the engine parts can start making cranking noises due to insufficient lubrication and will also consume more fuel than usual.

If there is a leak in the oil pan, the oil can spill on the hot engine parts and emit a burning smell. When you experience a burning smell, you should pull over at the earliest and get the oil levels fixed before driving any further.

This is the most common symptom for a car running on low oil. If your engine is overhearing rapidly, it is time to park your car and get the oil changed.

What Does a Car With Low Oil Sound Like?

A car with low oil will make cranking noises while running due to low lubrication between the engine parts.

When a car is low on oil, it makes knocking and grinding noises as the metallic engine parts rub directly against each other, damaging them and thereby creating metallic cranking noises in the process.

If the car is run for a little longer, the rods might break and a knocking sound can be heard from beneath the hood of your car.

What Happens if You Go Too Long Without an Oil Change?

If a car on low oil is driven for too long without an oil change, the oil level will reach zero and the engine can get seized and damaged beyond repair.

The continuous rubbing of metallic parts against each other can damage the engine to a point where it gets seized, meaning that the engine won’t rotate and reciprocate anymore. This happens only if the vehicle is driven for too long without changing the oil.

Can Low Oil Cause a Car to Shut Off?

Yes, low oil can cause a car to shut off as the engine can get stalled within minutes after the oil level has dropped to zero.

The engine in your car is made of tens and hundreds of metallic parts, many of them moving rapidly against each other under severe heat. The engine ensures there is proper lubrication between these metal to metal contacts, while also keeping the temperature under check throughout the process.

When engine oil is low in a car, the metal to metal contacts grind out against each other and leave the engine stalled. While a regularly maintained car won’t reach that level, a car that is driven on low oil will get stalled with a completely broken engine.

Can My Car Overheat Because of Low Oil?

Your car can overheat when the level of oil is too low. A car that has a low oil level is one of the likely causes of a car overheating.

The oil pressure light can turn ON when idling if the sensor is faulty or the bearings are worn out.

The problem can be with the oil pump as well. To get it checked, an oil pressure check should be performed at different RPMs.

To identify the main cause and get it fixed, you can follow the steps given below.

Oil Light Comes ON When Stopped

If the oil light is coming ON while stopping the car, there is either a problem with the oil level sensor or the oil pressure is too low.

Ideally, when at idle, the oil should be at least 5 PSI. If the oil pressure is below 5 PSI at idle, the Oil Light will come ON when the car is stopped while driving, like at a signal.