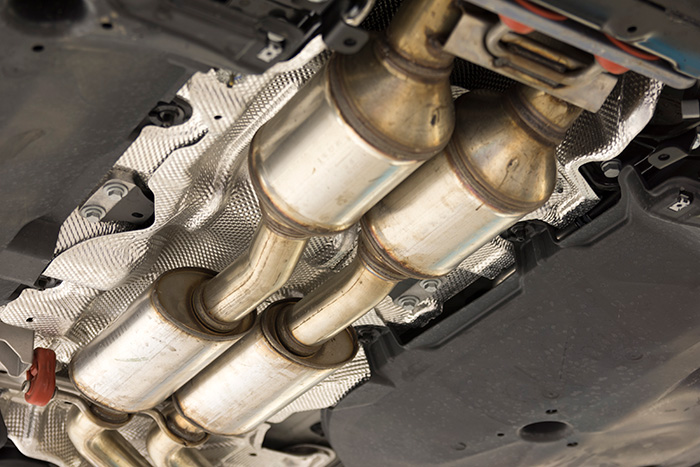 Can a car run without a catalytic converter?

A car can run without a catalytic converter installed in it and should not create any major issue with the car.

One of the main functions of a catalytic converter is to help in releasing reduced levels of pollutants in the air by controlling the power of the car engine.

However, car owners may have to pay a hefty fine if they are caught without a catalytic converter in their vehicles.

Can I just cut off my catalytic converter?

Most cars can operate without any difficulty despite the absence of a catalytic converter. However some cars may experience a rougher drive.

However, the converters don’t have a direct impact on its overall performance. The majority of cars that are OBD-II (On-Board Diagnostics) compliant make use of the O2 sensors, which are situated before the catalytic converter. Their main function is to regulate the air and fuel proportions.

What happens if I remove the catalytic converter?

If a catalytic converter is removed from a car, it may have several impacts on the car such as a notable rise in horsepower, better exhaust sounds and additional fuel options.

So, if it has been removed, these gases are released from the engine to the exhaust much more swiftly and in larger volume. Without the restricting effects of the catalyst, the engine can now function and use its optimal horsepower.

In the absence of a catalytic converter, the exhaust of your car will have a deep and loud sound.

As the catalytic converter operates to minimize the effect of the gases coming from the engine, it will also envelop the sounds of the exhaust along with the car’s muffler. This is a benefit only to those who prefer such a sound coming from their vehicle. It can be a disadvantage for owners who prefer softer and quieter drive.

The temperature of the car engine while the car is on the move is radically decreased in absence of the catalytic converter. This is because the load on the car’s engine is substantially reduced as the emission of gases takes place much quicker as compared to when the converter is a part of the vehicle.

Lesser friction is created due to the lesser load on the engine. As a result, you can anticipate this to help in reducing the depreciation of the car and its components.

Removal of the catalytic converter results in increased gas mileage due to its lower utilization. Lower pressure on the engine and more efficient engine performance is the result of removing the converter. The engine does not have to function twice as much to generate the same energy when the converter would have been in its place.

Does removing the catalytic converter affect the engine?

Removal of the catalytic converter has a major impact on the functioning of the engine. There is faster emission of exhaust gases from the engine in the absence of a converter. This helps the engine to run at an optimum level at a reduced operating temperature. The speed at which the different components of a car get corroded is also dramatically reduced as the engine functions with lower load resulting in lesser vibrations.

The fuel consumption level of a car is relatively reduced by removing the catalytic converter. As the car engine functions smoothly without the converter, it consumes lesser fuel to work with low pressure and friction.

Additionally, a car owner is open to choose from a variety of fuel options that can provide enhanced car performance. This can also boost gas mileage.

What does a car sound like with no catalytic converter?

This sound gets louder with time and may become unbearable to many while hitting the gas pedal. The entire exhaust system may not function properly and car owners may experience a splattering noise as the car speed is increased or decreased.

Can I replace my catalytic converter with a straight pipe?

It is possible to swap a catalytic converter with a straight pipe. It will not damage the car’s engine in any manner.

The straight pipe can originate from the manifold and run until the endpoint of the exhaust system. This placement will create ample back-pressure for the car engine even if you select two pipes of quarter-inch diameters. You may achieve a slight increase in horsepower after replacement.

The performance of a car engine can be enhanced by detaching the catalytic converter from its exhaust system. However, it does not majorly impact the overall functioning of the vehicle.

How much horsepower does removal of a catalytic converter add?

Separating a catalytic converter from a vehicle will typically add horsepower in a range between 5–20 HP. Large numbers beyond this should not be anticipated from the engine as many big cars do not even reach the mark of 10 HP.

It is not worthwhile to get rid of a catalyst converter only to gain such a small amount of gain in horsepower. A better alternative is to install a full exhaust system with a high circulating aftermarket catalytic converter without adjusting your vehicle’s emission levels. But this will not be a cost-effective option.

A more practical approach to enhance horsepower would be to fine-tune the engine by advancing the maintenance schedule.

How to remove the catalytic converter

After assessing the gains and losses of removing the catalytic converter, if you have decided to take it out of your vehicle, you can follow the below procedure for removing it. You must adhere to this process only if it’s legal and not restricted in your country.

Park your vehicle on a flat surface and not against a slope. Ensure that all four wheels are jacked and supported well. The road surface level must be even and the support should be strong as the stability of the car is of utmost importance. If you have just used or driven your car a few minutes earlier, then it is best to allow your car engine and exhaust system to cool down before starting the removal process.

Once removed successfully, place the sensor away from you as you will need an unobstructed view to perform the rest of the procedure.

Remove the bolts from the exhaust system and then slip OFF the exhaust pipe. You can start unbolting from the back and then proceed to the front ones, which makes the process easier. In case the bolts are difficult to remove because of rust or jamming, consider applying some oil to grease and unfasten them.

The removal is likely to be more challenging if the converter is welded to the exhaust system. You can still detach it with some effort by using a rotary saw or corresponding tool. Locate prevailing weld lines and cut along these lines carefully.

You may now extract the catalytic converter slowly. You need to decide on the further course of action of either discarding it or re-using it if you have completely detached it from the exhaust system. You need to be mindful that its interior is manufactured using high-priced metals.